Early last month HTC announced they had an exclusive deal with Dr Dre Beats to use their technology in upcoming handsets, and although they talked about “integrating Beats sound innovations into HTC handsets” it wasn’t clear if the partnership would simply improve technology inside the handsets or if any actual hardware (headphones) would be shipped with HTC devices.

PocketNow.com has a preview of a new HTC handset soon to be released, the HTC Runnymede which list among its features the “Beats Solo Headset”, presumably like the one on the Beats site here. So there you have it, looks like at least some of the Beats enabled HTC handsets will be shipping with Beats headphone hardware, no details on when/if this will be available in the UK but it could tie in with the O2 Beats partnership announced mid August.

Although the Runnymede handset itself appears to have relatively low specs by current standards, the focus is clearly on the richer audio and video experience with the aforementioned Beats integration within the phone and in the provided headset, but also with the improved camera and video specifications – “HD and surround-sound video capture with slow-motion playback. 8MP camera with F2.2 lens for wide angle shots and low light conditions”. 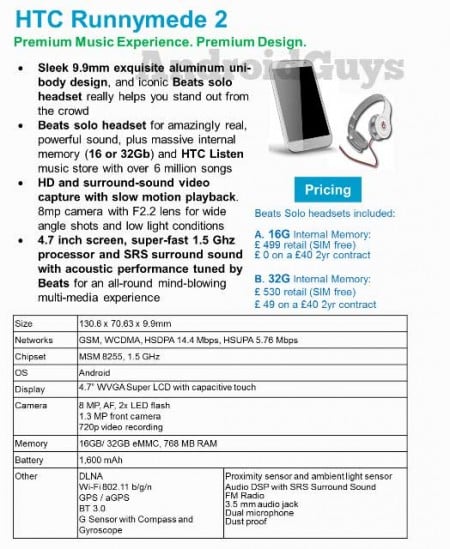 How To Install and Manage Your Hive Heating Installation