On January 10, 2013, it was announced that Amazon.com will be providing a new service called AutoRip. This new service provides mp3 versions of albums purchased on Amazon music, dating back as far as 1998 when the music store first came into existence. There is no longer a  need to rip the audio from CDs. The audio files are available as soon as the CD is purchased, which means the customer does not have to wait for the physical CD to be delivered. This sounds like a very compelling feature, and something that might give Amazon an edge over some of the other online music stores, namely iTunes. And since iTunes does not sell any physical CDs on their store, Amazon has a real chance to provide more value to their customers at the same price or lower.

Many suspect that Amazon’s reason for providing this for customers will spur the adoption of its music app “Amazon Cloud Player“.  The Cloud Player was initially made available on March of 2011. It can be accessed from 8 different devices. Amazon claims that their cloud service can run on more devices than any other cloud player service. If you have a Ford vehicle with Applink, you can even acces the Cloud Player from your car. 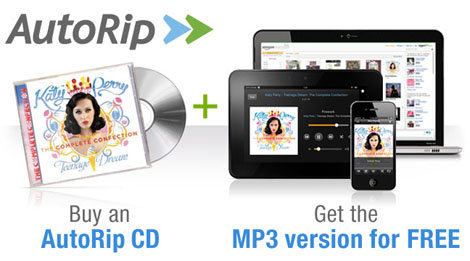 Auto Rip is available on albums that carry the Auto Rip logo in the product picture.  Not every album carries the Auto Rip logo on the cover. It is reserved for a select group of CDs for the time being, roughly around 50,0000. It’s important to remember that the service has just come to market recently.

Expect the catalog to grow considerably in the future.  This could become the biggest revolution in music since the introduction of mp3 players. This service is a smart move for Amazon, because as surprising as it might sound, about 50% of the  American music industry’s profit is based on physical CD sales.

For those worried about Cloud Player’s storage limit, it will be nice to know that mp3 files from Auto Rip will not count against your storage maximum of 250 songs for the free cloud service.

What Are Top 5 Upcoming Gadgets Worth Waiting For?