Earlier this month I covered the new Dubleup “credit card” sized portable battery, designed to be so small and light it can be carried in your wallet or purse.

Well, they’ve kindly sent me a pre-production sample to test, and after a couple of weeks with it I’ve found it incredibly useful.

The Dubleup is available in a choice of gold, silver and black. It is available with either a built in lightening connector for iPod and iPhone (Approved and Certified by Apple Inc.) or a built in MicroUSB for Android devices.

It has a capacity of 1280mAHwhich is low for typical external batteries, but that misses th epoint. I have a lovely 10’000mAH battery in my laptop bag. But I don’t carry that around with me all the time. The point of the DubleUp is to have it with you always, but not compromise the looks and design of your phone in the way a battery case does.

The Dubleup is everything it claimed to be. Small, thin, and very light. The Apple version has the lightning connector, and Android has MicroUSB connector. The cable recesses nicely into the charger, so is completely flush when not in use, and on the side is a MicroUSB port for charging the DubleUp. 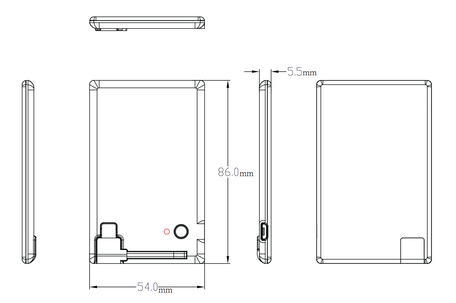 DubleUp could perhaps have streamline production, and used a MicroUSB connector on all versions, and supplied the MicroUSB to Lightning adaptor to Apple users, but this would have added to the production costs so was likely implemented directly.

Because of this DubleUp is also the Apple ‘certified’ – MFi – which is essential to make sure it complies with the charging standards Apple has and other cheaper accessories sometimes have problems with.

I have a Safekeep wallet from Proporta, and like many wallets it has an external ‘pocket’ which is ideal for keeping the DubleUp in. It adds minimally to the bulk of the wallet and isn’t a problem to carry around exactly as I would normally. It also fits in a credit card slot internally though – it’s down to personal preference and the style of wallet or purse you have.

And this is the whole point of the DubleUp – it is there when you need it. It might only give these higher capacity phones around half of a full charge, but the only time I’m running out of battery on my iPhone 7 Plus is toward the very end of the day and I want some power for the train journey home!

It’s perfect for that, and knowing I always have it on me whether I need it or not just gives me that additional peace of mind that I won’t have a dead phone for the commute home.

>> Checkout and back the Dubleup campaign on Kickstarter now.